The Australian Bureau of Statistics released the Australian Environmental-Economic Accounts[1] on June 15. It’s a fine achievement, which shows, among other things, growing efficiency in water and energy use. That’s good for both the economy and the environment. Less good is that waste generation is increasing, broadly in line with GDP growth, as shown below.

Equally notable, though, is the reaction to the environmental accounts compared to the response to the traditional national accounts, which give us the indicator GDP.

These national accounts are released to much market speculation and commentary. For example, reports of an expectation of a rising GDP[2] preceded the release of the latest national accounts on June 6[3]. Straight afterwards there was commentary by Treasurer Scott Morrison[4] and many media[5] commentators[6].

Read more: Why we need environmental accounts alongside national accounts[7]

So why no reaction to the environmental accounts? There are at least four reasons for this.

The second reason is that it is not clear to government or business how the accounts should be interpreted. The ABS commentary[10] is baldly descriptive:

More recently, between 2014-15 and 2015-16, the economy grew by 3%. At the same time, the population increased 2%; greenhouse gas emissions were up just under 1%; and Australian energy consumption increased less than 1%. Water consumption decreased 7% between these years. If the economy is growing at a faster rate than the consumption of our resources (or generation of waste and emissions), it is an indication that we are using our resources more efficiently, as measured by the Gross Value Added (GVA) of economic production per unit of resource use (or waste generated).

This is all true, but what does the information mean for the management of the economy and the environment? Of course, it is good that efficiency in resource use is improving. But we also need to understand what the limits are so that we can answer the key question: how much can we extract without risking the performance of the economy or the functioning of the environment?

For this we need other information. For example, to determine how much water we can use without damaging the environment we need information on the amount of water and the condition of ecosystems that depend on water in different places and times. With this information managers could compare the environment stress against the economic benefits or risks. All this can be done in an accounting framework, but is yet to occur.

It is also interesting that the ABS commentary neglects to mention waste. The amount of waste we produce is growing at about the same rate as GDP. Full waste accounts would improve our understanding of the reasons for this and the options for policy intervention. Sadly, while full waste accounts were prepared for 2010-11, they have not continued.

The partial picture means the interactions between the different parts of the environmental and the economy cannot be fully understood or explored. A key feature of the national accounts is that these are comprehensive. All industries and sectors of the economy are covered, with data on income, expenditure and assets.

The fourth reason is no one is quite sure how to use the environmental accounts. The greenhouse gas accounts fulfil an international reporting obligation[14] and the water accounts come under the Water Act 2007[15]. But the ABS environmental accounts are not specifically linked to any government process, although they have been used in modelling and economic analysis[16].

In contrast, the national accounts are used, for example, by the Department of Finance for forecasting revenue, by Treasury for preparing the budget and economic policy, and by the Reserve Bank of Australia when setting interest rates.

The interest in the national accounts is also due to the understanding by business and the public that the health of the economy is directly linked to their own interests – i.e. profits for business and employment and income for people.

It’s also widely recognised that national accounts, and GDP in particular, are a good indicator of economic health. There is no similar indicator for the environment. 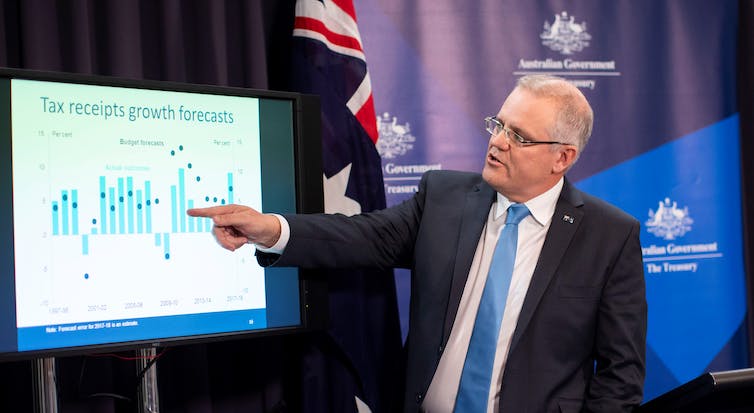 Traditional national accounts are well understood, which means everyone from the treasurer down pays close attention. Sean DaveyAAP

What can be done about this?

To fill this information gap, interest in environmental accounting is growing. The recently released National Strategy for Environmental-Economic Accounting[18] is a product of this.

How the strategy is implemented, however, will depend heavily on resourcing. This resourcing will need to consider not just the technical aspects of the accounts and related data sources but also the more challenging issue of how information from the accounts can be used in policy. Natural Capital Accounting for the Sustainable Development Goals[19] recently summarised emerging examples from around the world.

One promising example is the United Kingdom’s Natural Capital Committee[20], an independent body that advises the government. The committee made recommendations on the development of the UK’s 25-Year Environment Plan[21]. These included recommendations on the type and level of investments needed to achieve the goals of the plan and on the use of pilot demonstration projects.

Australia could establish a similar body to help develop a comprehensive set of environment accounts that meet policy needs. This would put us on the path to better policy, planning and management of both the economy and environment.

We would also get greater public discussion of the environmental accounts. Over time this might even rival the interest in the national accounts and GDP.