The online sale of pets is increasing, with more than 31,000 dogs and 24,000 cats relinquished a year through online marketplace Gumtree[1] alone. Our research shows this online market is worth an estimated A$14 million a year, just through this one platform.

Many other websites also allow people to sell their pets, so this number is likely only the tip of the iceberg. With this online trade becoming normalised, regulation is now needed to protect animals.

Trading pets online comes with many animal welfare risks. By relying on photos and seller descriptions of animals, potential buyers might be inadvertently supporting puppy farms or poor breeding practices. According to the RSPCA’s Smart Puppy Buyers Guide[3], if a seller is unwilling to allow you to visit their property, it’s a red flag.

With the rise of pet transportation companies, you can now buy a dog or cat online and get it delivered to your door without ever having left your home. However, this often means animals are transported long distances at young ages, with some breeds at greater risk of conditions like heat stroke[4] than others.

The risks of buying a pet online extend beyond the animal’s welfare. The Western Australian Commissioner for Consumer Protection David Hillyard recommends[5] you physically inspect a puppy and its parents before purchasing, to avoid being the victim of a scam or ending up with a sick or diseased animal.

Although purchasing a pet online is subject to the same consumer guarantees as other “products[6]”, the reality of exchanging or refunding a puppy you have fallen in love with is very different.

Buying and selling animals on Gumtree

We examined all the Gumtree ads for dogs and cats for February 2016. Far more cats were advertised as free (62%) versus dogs (23%). Dogs also commanded higher prices than cats, with some dogs advertised up to A$7,000 online. This compared with up to $2,500 for a cat.

The total value of the Gumtree ads we analysed was around A$1 million for dogs, but only A$155,000 for cats. 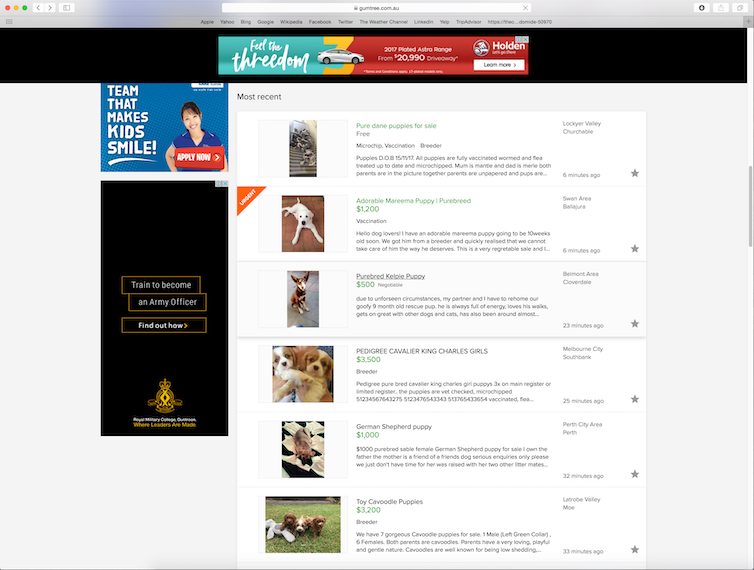 Puppies being sold on Gumtree for free or prices up to A$7,000. Screenshot

Young animals were traded more often on Gumtree, with most cats aged nine months and most dogs aged 1.4 years. More purebred animals were advertised on Gumtree, compared with PetRescue, a website that helps shelters and councils to rehome pets.

The top three breeds on both Gumtree and PetRescue were the Staffordshire Bull Terrier, Kelpie and American Staffordshire Terrier. The Ragdoll was the top cat breed listed, however most cats were probably Domestic Short Hairs (or “moggies”).

We also surveyed some of those who posted the ads online about why they decided to relinquish their pet that way. One person told us they wanted to interview new owners to make sure they found a good home for their pet. Another told us that the local shelter wouldn’t take their animal and they were afraid their pet would be put down in a shelter.

All of the people who responded to the survey indicated they genuinely cared for their pet - but it’s likely there are many others who just want to get rid of an unwanted animal.

How to regulate the pet marketplace online

Pet Advertising Advisory Groups have been established in Ireland and the UK for more than 15 years, and more recently in Belgium[7]. These groups encourage websites to adopt minimum standards in animal advertising and report rogue or unethical ads.

Almost all sites that sell animals rely on users to notify them of breaches, which is even more difficult when websites lack clear animal advertising policies.

In Victoria, the state government has made it mandatory[8] to list the microchip number at the point of sale, with both seller and website liable if a number isn’t listed. As a result, websites such as Gumtree now make it a requirement for dog and cat advertisements originating from Victoria.

But unfortunately this hasn’t been extended to other states where listing the microchip number is not yet mandatory. This is where voluntary guidelines would come into play.

Read more: Pets and our health: why we should take them more seriously[9]

Similarly, in South Australia from July 1, 2018 it will be compulsory to provide a breeder registration number at the point of sale for puppies and kittens. This will also be mandatory for online sites based in South Australia, but it won’t apply where advertising is occurring across Australia.

The UK government is currently considering legislation[10] to ban all third party sales of pets, meaning you couldn’t buy a new puppy or kitten without meeting the animal in person.

However, if Australia goes the same way as the European Union, the online sale of pets might become the most common way[11] to buy a pet in the future. Before this happens, we must develop adequate regulations to protect consumers and animals alike and help stem a growing animal welfare problem.