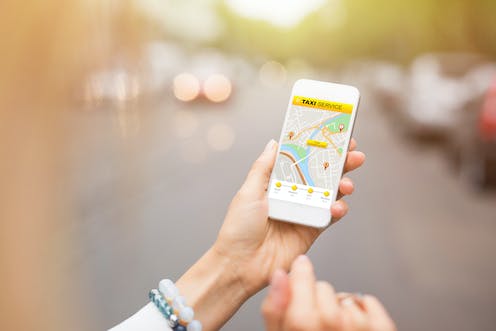 Australians in need of personal transport other than taxis have many options – Shofer[1], Taxify[2], GoCatch[3], Shebah[4] and Uber[5]. India’s Ola[6] launched a few months ago, and Chinese DiDi[7] starts today.

DiDi is no bit player. The company transports 450 million clients through 25 million rides a day[8]. This is almost five times more than Uber.

DiDi is a company with the size, resources and know-how to challenge Uber’s dominance in ridesharing and also to generate better, more efficient and equitable outcomes in urban transport more generally.

While competition between platforms is appealing for customers in the short term, it also raises questions about the long-term sustainability of the industry. Taxis were profitable in the past because governments allowed supply to be limited. But in this new era of competition profitability is threatened and working conditions downgraded.

Currently none of these platforms are turning a profit.

DiDi expects to turn its first profit in 2018 after losing $US300 million in 2017[10]. But new entrants into the Chinese market are threatening that forecast.

Similarly, Ola[11] plans to be profitable by 2019. But Uber’s aggressive strategy in India means this is far from guaranteed.

There are two possible explanations for why Uber Australia turned a profit last year.

First, Australian governments changed regulations and effectively ended the domination of taxi cartels. Second, there wasn’t as much competition in 2017.

All of this will change with the entry of DiDi and Ola. We are likely to see, as has happened in other markets, a contraction of margins for ridesharing operators.

Read more: Workers are taking on more risk in the gig economy[13]

Australia is just one battleground in the global war for market share being fought by Uber, DiDi and other competitors. While Uber may be considered the leader, it is a contested position. It has been kicked out of some European countries, is in fierce competition with Ola in India, and was bought out in China[14] by none other than DiDi.

Complicating the picture even more is that DiDi, Uber and Ola have a shared institutional investor[15]. DiDi further has a direct stake in Ola, Lyft and Grab.

Where Uber has pursued an aggressive international strategy with little regard for local rules, DiDi[16] has adopted a more cautious, strategic and conciliatory approach. This includes acquiring local ridesharing services, enticing taxi operators to join the platform and establishing relationships with local tech firms and regulators.

The ease with which Uber disrupted the Australian taxi market also threatens its profitability. The emergence of several competitors is possible because of the low costs of entry once an app and IT infrastructure are developed.

The consequence of increased competition is that drivers – who are classified as independent contractors – are continually squeezed. The only thing that stopped this dynamic in the taxi industry was state regulation and/or the emergence of local cartels.

Given the face-to-face nature of the service, there is an irony that the hyper-flexibility may end up hurting the very thing that was the platform’s main attraction – a better customer experience. Cutting drivers’ pay may be a knee-jerk and flawed short-term response, potentially causing irreparable brand damage and harming consumer experience as drivers lack the resources or desire to look after their customers.

Why stop at ridesharing?

The platforms’ classifications of their own services suggest that “big data” and more integrated transport solutions may be their real objectives.

DiDi regards itself[17] as “a data company that relies on AI capabilities to advance new mobility solutions and breakthroughs in transportation technology”.

Similarly, Uber described itself as technology firm providing a “smartphone and technological platform[18]” in court proceedings.

Indeed, Uber and DiDi both see integrated and autonomous transport solutions as the path to profitability. In addition to organising and controlling large amounts of valuable data[19], Uber’s plan is to integrate and streamline all forms of urban transport.

This might involve developing partnerships with governments, already a reality in North America[20].

Coupled with investment in driverless vehicles, this hints at a very different, and potentially sustainable, future.

DiDi[21] has similar objectives and is already offering integrated transport services in its domestic market, where its app offers a range of services including taxis, buses and bike sharing. DiDi is Uber’s most serious competitor for global supremacy in ridesharing services in terms of financial backing[22], war chest, scale of operations and digital capabilities.

While currently the dominant player in the Australian market, over time Uber might become the underdog in these rideshare, and transport, wars.

What does the entry of DiDi mean for Australian consumers and drivers?

At the moment, the disruption caused by the platforms has come at a cost.

While increased competition has resulted in lower fares for consumers, it has also placed downward pressure on working conditions. Poor pay and working conditions are not new to this sector, or the wider gig economy. Unless the government steps in, exploitative practices will become ingrained very quickly.

The good news is that if ridesharing is only a piece in the bigger puzzle of urban transport, state regulation should not be a deterrent to sophisticated players like DiDi and Uber. Additional regulation can ensure better outcomes for rideshare drivers, while they are still required.

In addition, it can also translate into better service for customers in the long term. The platforms’ technologies can help to solve urban transport problems.

So the good news is, if governments step in, this might be a war that customers, workers and the community can still win. However, which platforms will prevail remains to be seen.