Prime Minister Scott Morrison this week proposed a new deal in industrial relations, bringing together the government, employers and unions[1] to agree on reforms to create jobs and lift the economy in the post-CIVD-19 pandemic recovery phase.

“"We’ve booked the room, we’ve hired the hall, we’ve got the table ready,” he said on Tuesday[2]. “We need people to get together and sort this stuff out.”

Comparisons have been made with the “accords” of the Hawke and Keating Labor years between 1983 and 1991.

It’s not the same.

The Morrison government is simply recasting an agenda that business groups have pushed for the past decade, and inviting unions (and other stakeholders) into the room.

The Hawke-Keating accord era

This is a long way from the seven accords agreed between the Hawke-Keating governments and the Australian Council of Trade Unions.

The agreements secured union support for the government’s economic reform program by promising improvements in the “social wage” in exchange for unions curbing claims for pay rises.

Read more: Australian politics explainer: the Prices and Incomes Accord[3]

As a result, landmark social improvements, including the establishment of Medicare and guaranteed employer contributions to superannuation, were achieved for all Australians.

As the accords wore on, though, unions paid a heavy price as “efficiency” became an element in deciding the merits of claims for higher wages. The last accord, for example, ended centralised wage-fixing and ushered in enterprise bargaining. This did more for business productivity than for employee gains.

The election of John Howard in 1996 buried the accord era. His government embraced an overtly anti-union posture, culminating in the 2006 “WorkChoices” legislation that allowed individual workplace agreements. Howard championed this as giving flexibility to both employers and employees. But it really shifted the balance in favour of employers. The backlash helped end Howard’s reign in 2007. 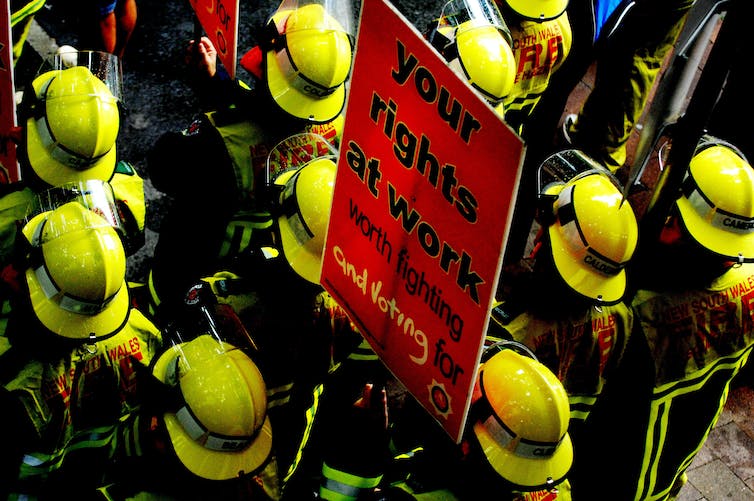 Firefighters protest in Sydney against the WorkChoices laws in 2007. Tracey Nearmy/AAP

The Labor government of Kevin Rudd then brought in the Fair Work Act, which reinstituted union-centred collective bargaining.

Since then the business lobby has fought back on two fronts: continuing to campaign for deregulation, and developing strategies (including through litigation) to enable employers to sidestep the Fair Work Act’s collective bargaining provisions.

The success of this approach for many employers largely explains the ACTU’s “Change the Rules” campaign before the 2019 election.

Read more: Where to now for unions and 'change the rules'?[4]

Industrial relations has therefore remained hotly contested. Prior to the COVID-19 crisis it was almost like a war of attrition. The Coalition’s Ensuring Integrity Bill[5] exemplifies its aggressive agenda. It would have enabled union officials to be removed from office, and unions deregistered, for minor breaches of workplace laws.

Lay down your guns

Now the prime minister wants everyone to put down their weapons.

In fact this has already occurred in the past two months, with the government, businesses and unions co-operating over emergency measures to deal with the pandemic.

Unions have agreed, for example, to the removal of award restrictions, enabling changes to business operations and work-from-home arrangements. They pushed hard for the JobKeeper wage subsidy scheme.

But how much more will union leaders be prepared to concede when it comes to considering permanent changes to workplace regulation?

The scope for consensus is limited, especially given four of the five items on the government’s agenda align with that of business organisations[7] such as the Australian Industry Group.

This will be the most hotly fought area. The federal government is likely to address business concerns about the Federal Court ruling[8] last week that “permanent casuals” have a right to paid leave as well as their casual loading. The likely outcome is a new statutory definition of “casual” to prevent this.

For unions, the court decision shuts down the ability of employers to treat workers as casuals long-term. A possible compromise might involve ensuring casuals have a legal right to convert to permanent employment after 12 to 18 months.

Employers in the resources and construction sectors have long complained they are compelled to negotiate with a union for new project agreements. Unions are unlikely to be willing to give this up.

Employer groups complain the Fair Work Commission’s strict approach to the “better off overall test” and other technical requirements make reaching enterprise agreements too difficult. The unions contend some employers have perverted enterprise bargaining through tactics such as getting carefully selected employees to vote for substandard agreements. There is little room for common ground here.

Employer groups have argued that wage-theft scandals are really due to awards being too complex. Yet we have gone from several thousand federal and state awards to 122 awards[9] (one for each industry).

Read more: All these celebrity restaurant wage-theft scandals point to an industry norm[10]

It is hard to see unions agreeing to (for example) removing leave entitlements from awards when they are arguing in a case before the Fair Work Commission for pandemic leave to be included in awards.

This is the one area where employee gains might be achieved, if the government makes good on its commitment to make systemic underpayment of workers a criminal offence.

Overall, however, the Morrison government’s agenda is skewed towards the reform ambitions of the business community without offering any equivalent of the social wage benefits of the original accord.

Unions may well regard his peace proposal as a request to surrender. They won’t, of course, and will try to ensure their concerns about wage stagnation and exploitation of workers in the gig economy form part of the coming discussions.