The UK’s space agency is already planning for spaceflights to Australia, taking just 90 minutes[1]. This week it announced the site of its first “spaceport”.

Where exactly a spacecraft might land in Australia is still anyone’s guess.

Australia wants to become a bona fide space power in the emerging space economy – exemplified by the rise of private space companies[2] such as SpaceX, Virgin Galactic, Blue Origin and others.

But the UK Space Agency’s well-developed plans to build Europe’s first spaceport in Cornwall, southwest England, as well as another to launch rockets carrying micro-satellites in Sutherland, north Scotland, shows the Australian venture has a lot more groundwork to do.

The Australian government founded the Australian Space Agency[4] just one year ago. It is about to invest tens of millions of dollars in international space projects.

But right now, it could be argued, it has a large problem: How will Australia connect to the rest of the international space economy?

Before the Australian Space Agency was founded, Australia’s main international relations regarding outer space were with the United States and some European countries. It has long hosted ground stations for NASA[5] and the European Space Agency[6]. 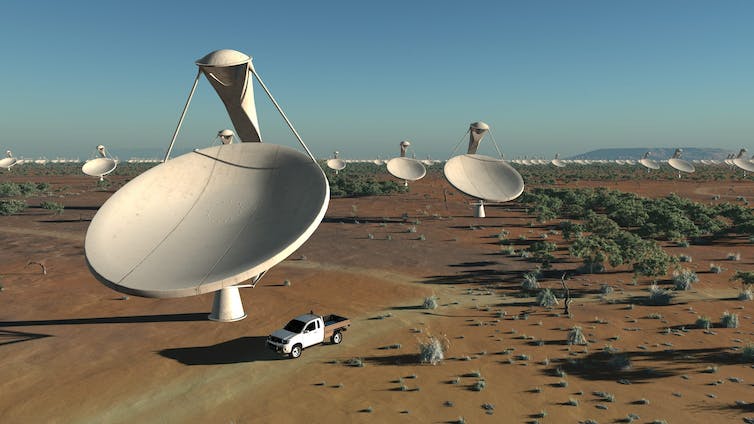 An artist’s impression of the Square Kilometre Array (SKA) telescope installation, which will have up to 50 times the sensitivity and 10,000 times the speed of current radio telescopes. EPA/Skatelscope

Though Australia has indicated it wants to “open doors internationally[7]” for space partnerships, so far it has been focused on building up ties with its old friends in the US and Europe.

The Australian Space Agency has been talking to NASA about cooperation, including on NASA’s Lunar Gateway[8] effort to build a permanent presence on the Moon. It has signed statements of strategic intent with Boeing[9] and Lockheed Martin[10], two large American aerospace firms that are NASA contractors. A private northern Australian rocket launch company reports it is negotiating[11] to launch NASA sounding rockets next year.

Read more: NASA and space tourists might be in our future but first we need to decide who can launch from Australia[12]

The US communications firm Viasat[13] plans to build a ground station near Alice Springs. American universities are the only foreign partners[14] of Australia’s newly opened CubeSat and unmanned aerial vehicle research centre, CUAVA.

These are still early days, but outside of partnerships with the Americans and Europeans, the only major international developments since the Australian Space Agency’s founding are with Canada[19] and the United Arab Emirates[20].

Ties with China and India

So should Australia diversify its relations?

On the one hand, tying Australia’s space economy to the Americans and Europeans makes sense. Both have large markets and developed space industries. Close ties to both will likely ensure a steady stream of business.

On the other hand, there are benefits to pursuing a new type of multilateralism that is less US- or Euro-centric.

Through the Square Kilometre Array project, Australia has links with China and India. Compared to the Americans and Europeans, these two countries have different competitive strengths in the global space industry.

Read more: To carve out a niche in space industries, Australia should focus on microgravity research rockets[21]

Positioning between them could put Australia in a unique place in the global production networks of space science and technology. This is particularly so if relations between some of these larger players are distant (the United States and China, for example). Australia could benefit from being a go-between.

Australia could also choose to supplement these larger relationships with ties to smaller countries. Especially with other new entrants into the space economy – New Zealand established a space agency[22] in 2016, for example – there are common points of interest.

All are likely to want to diversify relationships with big space powers and not be pushed into dealing with just one or another. Again, friction between the United States and China comes to mind. Smaller space powers could band together to maintain their ability to make their own independent decisions.

There is no right answer about how Australia should proceed with international engagement in the space economy. More accurately, there are different right answers depending on what sort of space power Australia ultimately wants to become.

Australia’s space agency is just one year old. The country does not need to automatically continue its Western orientation. It can instead recreate itself as a truly international actor in the new space economy.