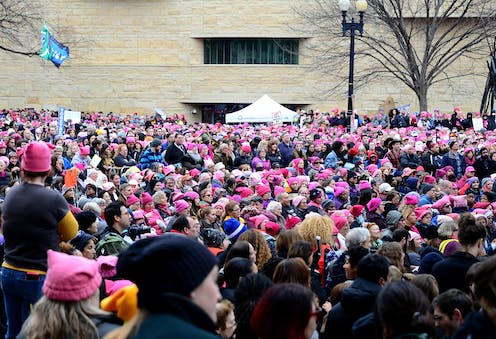 We are in the midst of an outpouring of feminist activism kicked off by the pink pussy hat[1] movement in the United States and propelled by #MeToo[2], which has spread to Australia where a range of luminaries have been named as harassers[3].

And yet we are also in the midst of a backlash, a concern that gender equality has moved too fast[4], aided by “gender fatigue”.

Twenty-seven years ago, Susan Faludi[5] created a furore by documenting what she said was a backlash against women. She said it wasn’t new, as evidenced by penalties imposed on childless and unwed women in ancient Rome, and witch burnings of medieval Europe. Each was a response to perceptions that women were gaining ground.

This time it is taking the form of a resurgence of the men’s rights movement, and also in the cries of #notallmen[6]. It is evident in the trolling occurring on feminist websites, negative comments in the media and the rape, violence and death threats inflicted on feminist activists.

That’s in social media and society. What about the workplace?

Backlash in the form of fatigue

It can be as simple as organisational silence and inaction. Even in organisations where managers and workers are committed to the idea of equality, it can take the form of resistance to specific initiatives.

It is aligned to gender fatigue, or seeing further advances in gender equality as a “non-issue”.

My colleagues (Associate Professor Linda Colley, Dr Meraiah Foley and Professor Rae Cooper) and I have examined managers’ and employees’ understanding of gender equality and have often been told “gender is not an issue here[7]”.

It is as if they are tired of hearing about it and want it to be “done”.

While we have found many organisations which are well advanced in their gender equity journey, we have yet to find one in which it is actually done.

What’s worth aiming for

Sometimes women are told that the remaining gender inequality is their own fault. #Metoo has been blamed for men being afraid to mentor[8] women. Women are told to “lean in[9]” – to focus on empowering individuals rather than women in general.

an understanding of gendered power and its intersections with other forms of inequality, individual commitment to act on this knowledge and the collective organisation to approach gender equality.

That understanding might lead to non-hierarchical organisational structures with different concepts of power. It might subvert the concept of work so that it is no longer regarded as the guiding force of lives. It might mean working to live, not living to work. It might mean that there isn’t paid work and other work, just “work”.

It might make future backlash unnecessary, and gender fatigue redundant.

This article is an edited version a recent address given by Sue Williamson as president of the Association of Industrial Relations Academics of Australia and New Zealand.